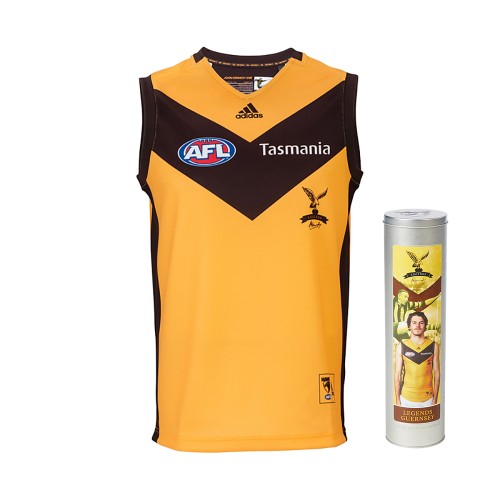 2019 sees the introduction of the clubs 'Legends' series commemorative guernsey that will be worn on-field when we play away from the MCG and first seen during our Round 1 clash with the Adelaide Crows at Adelaide Oval on Saturday, March 23rd.

Inspired from a guernsey worn by the club in 1933, this reproduction captures the essence and symbolic heritage of Hawthorn in this vintage guernsey that pays homage to our admission to the Victorian Football League (VFL) in 1925.
The design is a modernised version of the predominantly gold with brown chevron and acknowledges the club logo used in this era on the rear.

The motif proudly worn on the left high chest has been re-digitised to honour the 'Legends' of the Hawthorn Football Club.

In 2019, we celebrate John Kennedy Snr who is honoured with his signature below the chevron in addition to statistical information and a digitised photo on the back neck collar of the guernsey summarising his irrepressible career accolades.
John 'Kanga' Kennedy played 164 games for the Hawthorn Football Club in 1950–59 (Captain 1955-59), including its first ever finals appearance in 1957 and was awarded club Best and Fairest awards four times (in 1950, 1951, 1952 and 1954).

Kennedy's team became known as 'Kennedy's Commandos'. Wearing his trademark overcoat, his booming voice and stirring words inspired generations of Hawthorn players, taking them from easy beats to the most respected and revered club in the League.
He epitomised and taught all the values and attitudes that the club cherishes and has been passed from generation to generation through the indoctrination of John Kennedy Snr.

These were overwhelmingly a sense of TEAM, DISCIPLINE, INTEGRITY and HUMILITY. These are now core values, part of the club's nucleus and as we compete in the 21st century, this legacy as defined by John Kennedy Snr will never be forgotten.

In a new initiative recently adopted by the club, each club player issued guernsey now carries the full name of the player and his unique club debut number within the neckline adding to its authenticity and collectability (see attached images). This is the 1st time this commemorative Legends guernsey will be worn.

Manufactured under license by our on-field partner adidas, the 2019 Legends Guernsey consists of:-

*Only players that represented the club on Saturday 23rd March (22 players) will be auctioned off as a part of this program.

Successful bidders should expect to receive their auction item in late April 2019. 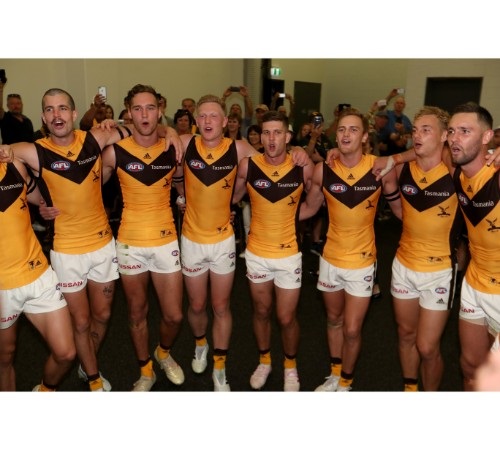 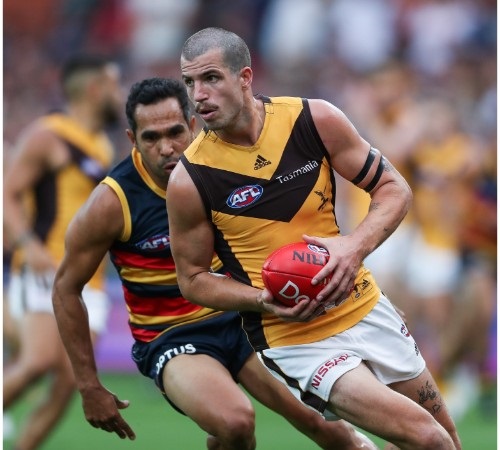