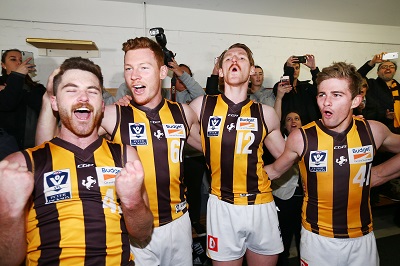 Box Hill and Hawthorn are now undisputedly the most successful AFL-VFL alignment after the Box Hill Hawks secured their third VFL flag at Etihad Stadium on Sunday at the 2018 Peter Jackson VFL Grand Final.

Having defeated Williamstown by just one point in a nail-biting preliminary final clash, the Hawks outclassed its rivals Casey to become just the fourth VFL side to win at least three premierships since the competition took its current form in 2000.

Box Hill Hawks completed one of the VFL’s most stirring finals campaigns after a come-from-behind 10-point grand final victory over Casey Demons at Etihad Stadium.

The Hawks, sixth on the ladder after the home-and-away rounds, became the first team to win the premiership from outside the top four since the competition was revamped and a top-eight system introduced in 2000.

The Hawks previously triumphed in both the 2001 and 2013 deciders and now join fellow VFL sides Sandringham, North Ballarat and Geelong as the competition’s leading flag winners.

After yesterdays victory, Box Hill and Hawthorn are currently the most decorated of the four AFL-VFL alignments.

Don’t miss this chance to purchase a piece of Box Hill Hawks history with this extremely rare & unique collectable.

*Only players that represent the club on Sunday 23rd September (23 players) will be auctioned off as a part of this program.

Successful bidders should expect to receive their auction item in mid October 2018.

Customers will be contacted by phone when their item is ready. 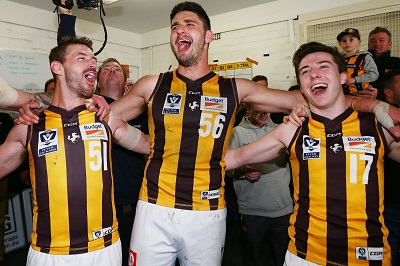