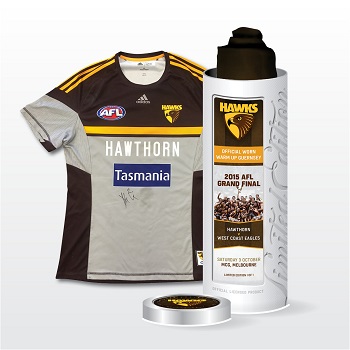 On Saturday October 3rd 2015, we witnessed Clarkson's Hawks irrefutably stamp itself as one of the greatest sides in VFL/AFL history, clinching its third consecutive premiership with a commanding 46-point win over West Coast in the a Grand Final on record.

Up for auction for the first and only time are the official adidas warm-up Guernseys, worn by the players before the bounce on that great day in October.

After the Eagles kicked theopening goal of the game, the Hawks took a stranglehold on the contest with nine straight goals to set up a 16.11 (107) to 8.13 (61) triumph.

Just three weeks after West Coast humbled them in the qualifying final, the Hawks turned the tables, rediscovering their trademark mix of 'unsociable' pressure and clinical ball movement that had deserted them at Domain Stadium three weeks prior.

Cyril Rioli was the star, providing much of the spark on Hawthorn' s forward line, particularly in the first half. He finished two goals, four goal assists and 12 marks and was an extremely popular winner of the Norm Smith Medal.

It comes superbly presented with the 2015 ‘Three-Peat’ Collectible Tin.

• All guernseys are match worn*, unwashed*, featuring a sublimated player number with authentic individual signature front and back of garment.
• All match worn guernseys will come presented in a collectible tin with an outer decal to mark the occasion
• Each will be accompanied by a ‘Certificate of Authenticity’ provided by the AFL Players Association and the AFL
• Fully licensed by the AFL .
• Edition 1 of 1.

Successful bidders should expect to receive their auction item in late April 2016. 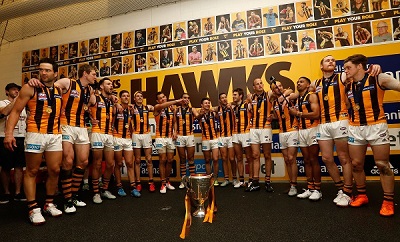 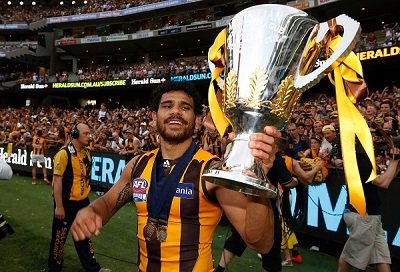