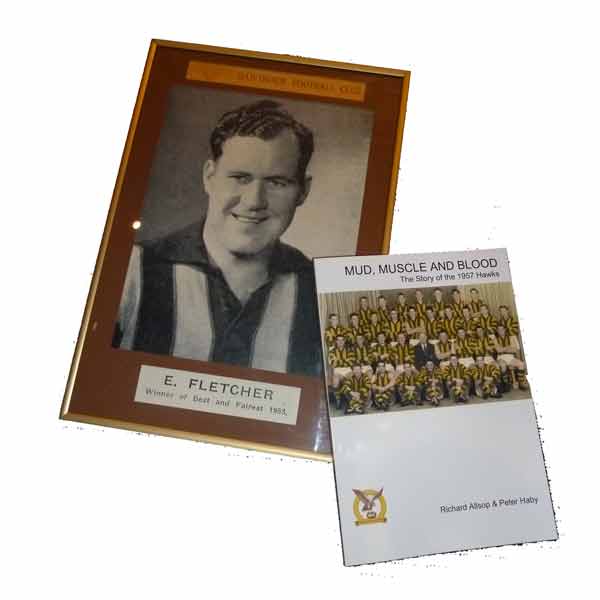 The Ted Fletcher 1953 Best & Fairest photo will appeal to any collector of Hawks History. The photo hung in the Past Players Rooms, Dr Ferguson Stand at Glenferrie for many years and is in excellent condition.

Fletcher wore number 23.  He proudly claimed to have set the benchmark for John Peck, Don Scott, Dermott Brereton and Lance Franklin all who carried on Fletcher’s tradition that to wear number 23 successfully you had to have a touch of the larrikin.

Recruited from Port Melbourne, Fletcher gave the Hawks years of good service both as a ruckman and in defence.  Renown for his consistent marking, he vigorously protected the smaller men in the side with his strength in the packs.  He represented Victoria in 1952 and captained the Hawks in 1953-54 winning the Best & Fairest in 1953.

Published by the Hawks Museum; Mud, Muscle & Blood the Story of the 1957 Hawks tells the story game by game of the Hawks exciting battle to make the finals for the first time defeating Carlton in the famous “Hailstone Match”

There are bios on each of the 36 players who played that year plus key officials.  The book has many unpublished photos and comes with a bonus CD copy of the very rare LP recording produced in 1957 to celebrate the year.  You will hear radio highlights and interviews of the players & officials including John Kennedy Snr and legendary Head Trainer, Beau Wallace.

Please allow at least one week after payment to recieve this item.