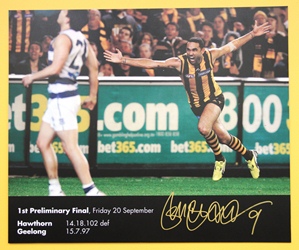 The Fields of Gold Wall is a celebration of our 2013 journey for the Premiership Cup. Only pictures from winning games were placed on the wall that is located on the players level of our Waverley Park facility. It was considered a great honour amongst the players to have your photo placed on display. The players and coaches nominated post each victory which photo would go on the wall. The image would be either of a player who made a great contribution to our win or a memorable act during a game which inspired teammates and fans alike.  After 11 losses in a row against the Cats it was our time to shine and move forward to the 2013 Grand Final. As we all know it wasn’t as simple as that. For much of the game we trailed and 10 minutes into the last quarter the task looked monumental as the Cats jumped to a 20 point lead. Enter Shaun Burgoyne so often the bloke we go to when we need a lift in the middle or up forward. He didn’t let us down. He kicked 3 goals on the night, had 24 possessions and a number of critical centre bounce clearances. No Hawthorn fan will ever forget his “aeroplane” celebration when he kicked the goal that got us the lead late in that 4th quarter. He won’t forget it either. This photo is a must have collectors item for any serious Hawthorn supporter.  Item is made from corflute material, is 600mm wide x 500mm long and is personally signed by Shaun Burgoyne.   These are rare pieces of Hawthorn memorabilia personally signed by players that would be a magnificent treasure for any serious Hawthorn supporter.  Grab your favourite piece of our victorious 2013 season and display it proudly at your home.