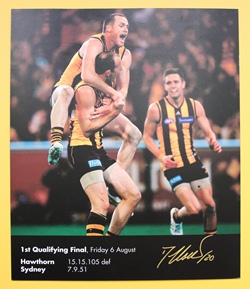 The Fields of Gold Wall is a celebration of our 2013 journey for the Premiership Cup. Only pictures from winning games were placed on the wall that is located on the players level of our Waverley Park facility. It was considered a great honour amongst the players to have your photo placed on display. The players and coaches nominated post each victory which photo would go on the wall. The image would be either of a player who made a great contribution to our win or a memorable act during a game which inspired teammates and fans alike.  For the second week in a row we faced our nemesis from the 2012 GF the Sydney Swans. What a glorious victory this proved to be. Our 54 point win was on the back of an incredibly even team performance. One of our great contributors on this night was one of our quiet achievers David Hale. His efforts in the ruck and up forward were inspirational. His ability to compete, win contested ball and make second effort are highly rated within our club. In this picture Rough is celebrating with him madly after a 4th quarter goal that put the game beyond Sydney’s reach.  Item is made from corflute material, is 600mm long x 500mm wide and is personally signed by David Hale.   These are rare pieces of Hawthorn memorabilia personally signed by players that would be a magnificent treasure for any serious Hawthorn supporter.  Grab your favourite piece of our victorious 2013 season and display it proudly at your home.