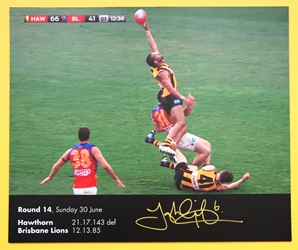 The Fields of Gold Wall is a celebration of our 2013 journey for the Premiership Cup. Only pictures from winning games were placed on the wall that is located on the players level of our Waverley Park facility. It was considered a great honour amongst the players to have your photo placed on display. The players and coaches nominated post each victory which photo would go on the wall. The image would be either of a player who made a great contribution to our win or a memorable act during a game which inspired teammates and fans alike.  We travelled to Launceston to play an in form Brisbane Lions at Aurora Stadium and managed to emerge with a 58 point victory. Josh Gibson produced one of the most courageous acts you will ever see on the footy field when he jumped backwards into a pack to spoil the ball only to land awkwardly on his head. The crowd hushed, fearing the worst. Much to everyone’s relief Gibbo got to his feet was ushered off the ground for examination and returned to the field minutes later. His attack on the ball at the next contest he was involved in had to be seen to be believed. He is the ultimate warrior.  Item is made from corflute material, is 600mm wide x 500mm long and is personally signed by Josh Gibson.   These are rare pieces of Hawthorn memorabilia personally signed by players that would be a magnificent treasure for any serious Hawthorn supporter.  Grab your favourite piece of our victorious 2013 season and display it proudly at your home.