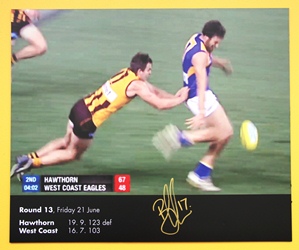 The Fields of Gold Wall is a celebration of our 2013 journey for the Premiership Cup. Only pictures from winning games were placed on the wall that is located on the players level of our Waverley Park facility. It was considered a great honour amongst the players to have your photo placed on display. The players and coaches nominated post each victory which photo would go on the wall. The image would be either of a player who made a great contribution to our win or a memorable act during a game which inspired teammates and fans alike.  For the 2nd week in a row we played at Etihad Stadium, our opponent this time a pumped up West Coast Eagles. Desperate to win the Eagles threw everything at us in a high scoring encounter which we won by 20 points. It was only in the latter half of the 4th quarter that we were able to pull away. A critical moment in this game was Brian Lake’s chase down tackle on Josh Kennedy. It saved a certain goal and raised the spirits of our group. The 2013 Norm Smith Medallist made a great contribution to our victory on this night.  Item is made from corflute material, is 600mm wide x 500mm long and is personally signed by Brian Lake.   These are rare pieces of Hawthorn memorabilia personally signed by players that would be a magnificent treasure for any serious Hawthorn supporter.  Grab your favourite piece of our victorious 2013 season and display it proudly at your home.