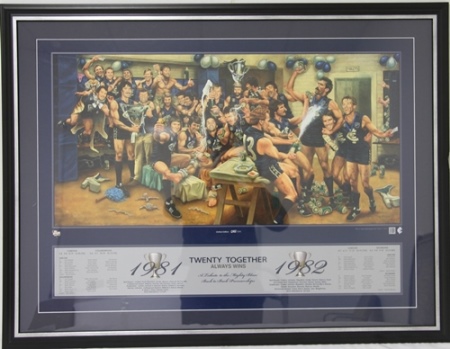 Carlton Football Club 'Twenty Together' Back to Back '81 and '82 Premiership framed poster - limited edition piece 82 of 200.

Ken “Bomba” Sheldon swings from the lockers in his usual excitable fashion. He is draped in the famous Tiger rug, now somewhat toothless and missing an eye that has been symbolically plucked by the Mighty Blues. Ken holds it in his hand as a trophy. It is also a play on the fact that the song “Eye of the Tiger” was the motivational song for the finals campaign in 1982.

What are those knickers draped on the locker at top left with the initials B.B? Do they have something to do with the white platform boots and the pale blue Pom Pom on the floor, bottom left?

Mario “Tatts” Bortolotto waves a Tatts ticket above his head in recognition of his perceived good fortune in 1981. He has his arm around Scott Howell who is wiping Mario’s muddied arm with a Scot Towel. David Glascott and Greg Wells are part of this group standing on the seats arm I arm. Wells holds and empty glass, as he was famous for his “sculling” ability.

The brains behind the back to back campaign…Mike Fitzpatrick and David Parkin stand proudly holding the 1982 cup.

Rod Ashman is hoisted on Robert Klomp’s shoulder giving the famous thumbs up. This thumbs up was made by Rod after kicking a decisive goal in the 1982 GF. He had befriended a sick boy who was losing his hearing and sight and had asked for some sign from Rod that he was thinking of him on the famous day.

Wayne Harmes and Des English were best mates and are seen here embracing in victory. Harmes is savouring it all with a Park Drive “ciggy” and a bottle of Bacardi. He is just looking for a bottle of coke to wash it all down.

Below them in the foreground David “Swan” McKay raises a drink and lays a consoling arm around a still dazed Ross Ditchburn. Ross holds an ice pack to his head after copping one from Jimmy Jess early in the 1982 GF. He chews a hayseed to remind him of home in the wheat belt of W.A.

Central to any celebrations was always Mark Maclure. He gets the party started by popping the cork on the first of many bottles of Champers.

Below him Wayne the “dominator” Johnston is where he usually is…under the pack in the centre of the action. His bravery had its price as his body was truly battered by the end of his career. He is swathed in bandages and ice packs. He has the initials in blood on his knuckles G.U.B.B.Y.

His fellow enforcer Jimmy Buckley cops a spray of the best kind from the Buzz. The melted arm guard in his right hand (to be included) is a famous story as it melted on the dash of his car and could not be used. That is why he had to kick Robert Wiley instead to save any more damage to his broken hand. Note the steel capped boot with the initials R.W.

Behind him the 1981 Norm Smith medallist Bruce Doull wears a fitting crown. The 1981 Premiership cup complete with slumped magpie. It is place there by Warren WOW Jones who has taken Helen’s scarf and at the time of her famous entry onto the ground was said to be keen to get Helen’s phone number from Bruce (see note in his left hand).

Peter Bosustow was not the shy retiring type so he is seen livening things up by pouring his beer over Buckley’s head. He is wearing Tony Barber’s hat that he adopted on the day.

The invitation to the lodge in 81 and 82 was unprecedented in Australian history for a football team. Their first visit was conducted with the respect it deserved. The second visit was a little more relaxed with players taking a few souvenirs. See the ashtray with the coat of arms on the table next to Phil Maylin. Phil has his packet of Wills smokes on the go as he cools down Val Perovic and Peter McConville.

Ken Hunter famously taught Val how to “shot gun” a can. In one famous session, Val would not give up until he beat Ken. 38 cans later…?

Peter McConville was infamous for his many attempts at a big grab. He would invariably rake his long stops across whoever was in the way. Val reckons it was usually him. Note the scars on Val’s legs and the sharpened stops on Peter’s boots.

McConville and Marcou close mates to this day, round out this famous group.

In Alex’s left hand is the number of his date to the lodge in 1982. Needing a partner for the grand occasion he recruited a gorgeous gal who was to be nicknamed “fabulous”. Now, “Fabulous” made the most of the call up by getting plastered and falling down the stairs at the Lodge. First lady Tammy Fraser had to take her to hospital and the two became friends. How unlikely!

The coach’s locker is seen at back far right. There was said to be a couple of unusual things found in Parkos locker. David a teetotaller, was surprised to see it crammed full of empty beer cans and even more so to find a blow up doll in there as well.

Item must be collected from Hawthorn Football Club or delivery arranged by Friday 30 August 2013. Any courier or postage delivery requirements are at the expense of the successful bidder. 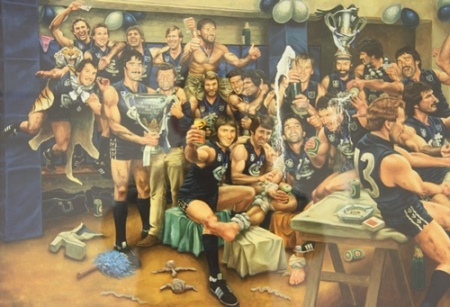 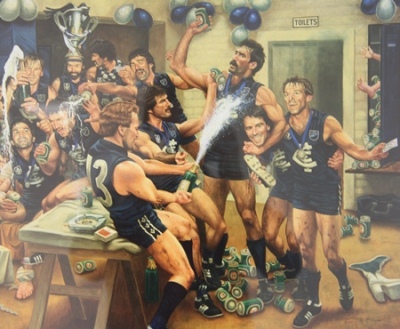