From left to right:

Taswegian winger Graeme Wright and his close mate Gavin Crosisca celebrate with their favourite drop, Ouzo and Coke. Note the wings on Wright’s ankle, symbolising his lightning pace and the position in which he played, and the apple in his hand. They are laughing as Michael Christian reminds a typically fired up James Manson that he better tone it down or cop another whack. Chrisso famously punched James in the race one day as they were running out to play, when the excitable Manson got too much in his face.

Behind them the equally exuberant Shane Kerrison delights in throwing a flaming paper airplane (bomber). Craig Kelly’s cup runneth over, in this case, all over Damien Monkhurst who is quite happy to cop “this” kind of spray (champagne). Monkey’s arm is around his fellow ruckman and close mate Manson. In Monkey’s right hand is an RACV key ring. Apparently his excuse for missing training on a regular basis was that his car kept breaking down and he couldn’t make it in all the way from Woori Yallock.

Front and centre are two of the elder statesmen of the team. After loyal and stellar careers with the Magpies, who would have been happier than these two. Peter Daicos had a “Premier” season carrying the weight of the forward line on his shoulders with 97 goals. Here he waits for an ecstatic high five from Dennis Banks with whom, along with Tony Shaw, played in 4 losing Grand Finals for the Pies through the under 19's, reserves, and seniors. What is that icy pole wrapper at Daics’ feet? Is it a Paddle pop? Darren Millane, the man that embodied the courage and commitment that it takes to win a Flag. Playing for 6 weeks in excruciating pain due to a broken right thumb and despite the restriction that this put on him physically, the man they call “Pants” was in the teams best on the day that counts. How fitting he had the ball in his hands when the siren went.

Captain and coach deserve to be at the heart of this image. Tony Shaw gave everything he had to his beloved club. It is just reward for him to retire, a Premiership Captain. It is also typical of his dogged, determined and unwavering spirit that on this day he would make sure he was best on ground…the Norm Smith medallist. Lethal Leigh Matthews brought to the Club his wealth of experience, talent, and fierce expectation of the highest standards for his players. He could command that because he gave it as the most decorated and respected player in the games history. In a rubbish bin in front of him the Collywobbles are dispatched forever.

Up the back Jamie Turner and Mick McGuane stand on the seats and throw more burning paper bombers. It just so happens that Mickey’s plane is made from a page of the Form Guide. He also has the earplug and transistor tuned into the races. Craig Starcevich and Gavin Browne take a seat and a well earned rest. With bandages and ice packs on their heads, they symbolise the sacrifices that are made on the field, for the team. They both copped king hits from Terry Daniher and are still a little starry eyed. Mick Gayfer does what he does best. He applies a blanket. But this time to comfort a team mate rather than smother an opponent. Dougy Barwick was the consummate professional, always keeping himself in
perfect shape. It is said that he would prefer to arm curl a six-pack rather than drink one. Shane Morwood joins in the fun. Finally, two close mates enter the scene on the right. This symbolises the fact that they were new to the club, being first year players and South Australians. Scott Russell and Tony Francis were said to be Siamese twins.

What great inclusions they were.

Item must be collected from Hawthorn Football Club or delivery arranged by Friday 30 August 2013. Any courier or postage delivery requirements are at the expense of the successful bidder. 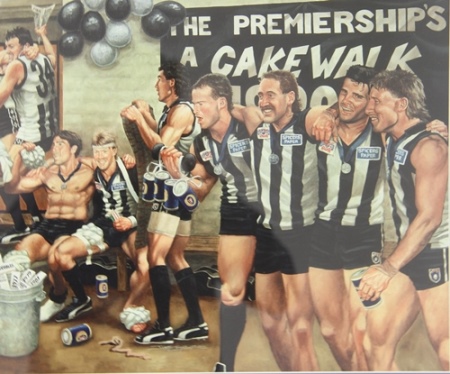 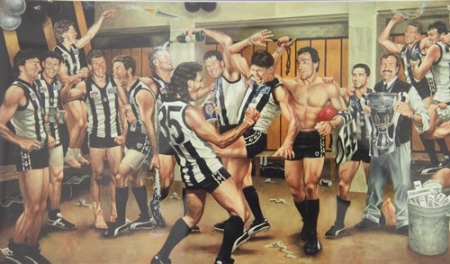