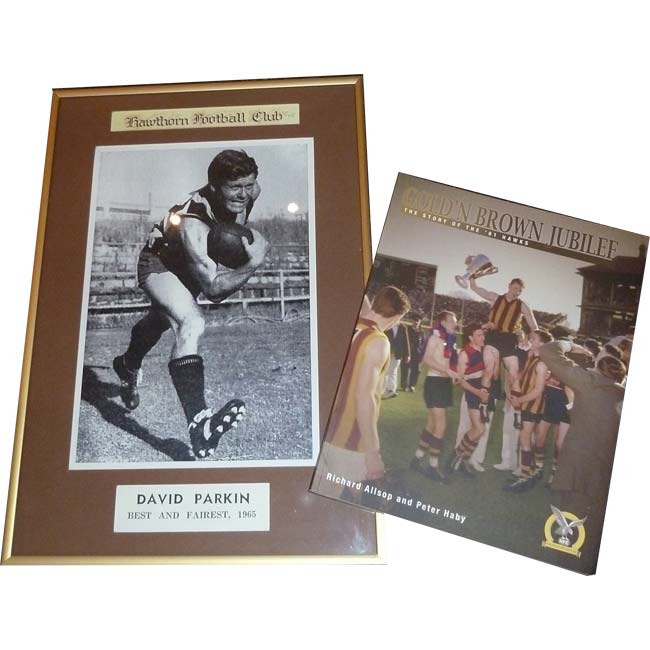 A one off offer;

A framed photo of David Parkin, the only Hawk to play in a Premiership then coach a Premiership plus the book the Gold’n Brown Jubilee the Story of the ‘61 Hawks

The framed photo of David Parkin, Best & Fairest winner 1965 will appeal to many a keen collector of Hawks History.  The photo hung in the Past Players Rooms, Dr Ferguson Stand at Glenferrie for many years and is in excellent condition.

Published by the Hawks Museum the book the Gold’n Brown Jubilee the Story of the 1961 Hawks is signed by the Club Legend, Graham Arthur and fellow teammate Morton Browne who both stared in the Club’s first Premiership.

140 pages in all, the book features many unpublished photos and tells the story game by game of the Hawks exciting battle to make the finals, then play in the Club’s first VFL Grand Final defeating Footscray for the Premiership.  A highlight in the book is a photo the features Parkin in his first game.

There is a bio and stats on each of the players who played at least one senior game that year plus the key Club officials.  As a bonus the book comes with a DVD that features interviews with the 17 surviving players, coach John Kennedy Snr and a newsreel film featuring highlights from the Grand Final.