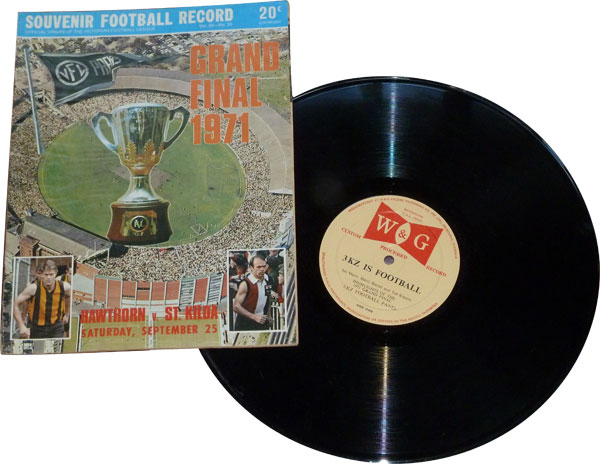 On offer a mint condition a 12 inch LP recording of the 1971 Grand Final from radio station 3KZ with Ian Major, Harry Bietzel and Ted Rippon.

This recording on the W & G label captures the highlights from this ruggered encounter between the Hawks & the Saints with interviews with the stars from the game.

Played in the rain, it was a brutal, grinding clash.  As the game was slipping away from the Hawk’s grasp, wingman Leon Rice kicked a left-foot goal just before three-quarter time to cut the deficit to 20 points.  Ruckman Don Scott refused to bow to the inevitable and he called on the Hawks to fight on at the three-quarter-time break.  They did just that with Bob Keddie destined to gain football immortality with his match winning four goals in the last quarter.

The Hawks won by seven points, the Club’s second Premiership.