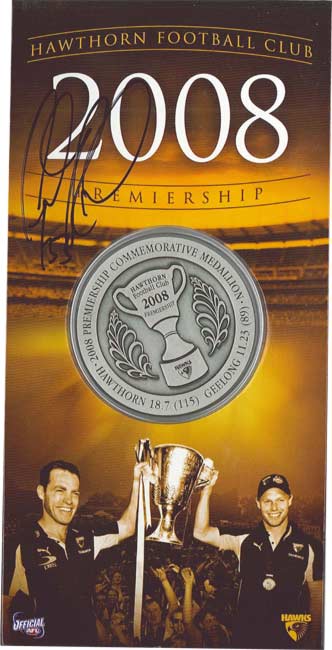 The Hawks won their 10th Premiership in 50 years, 17 years since its last, defeating Geelong by 26 points in 2008. It was a game where 19 year old Cyril Rioli, playing in only his first season of senior football, set the biggest stage alight, not only with 2 hard earned Grand Final goals, but a match-changing tackle on Geelong's Max Rooke, which had every Hawthorn supporter, including coach Alastair Clarkson, stand and applaud.

This medallion commemorates Hawthorn's great victory, it comes complete with a mounting display card that features the score and Premiership Team photo. The front of this card has been autographed by Cyril Rioli. This item comes to you with a Certificate of Authenticity from the Hawthorn Football Club.