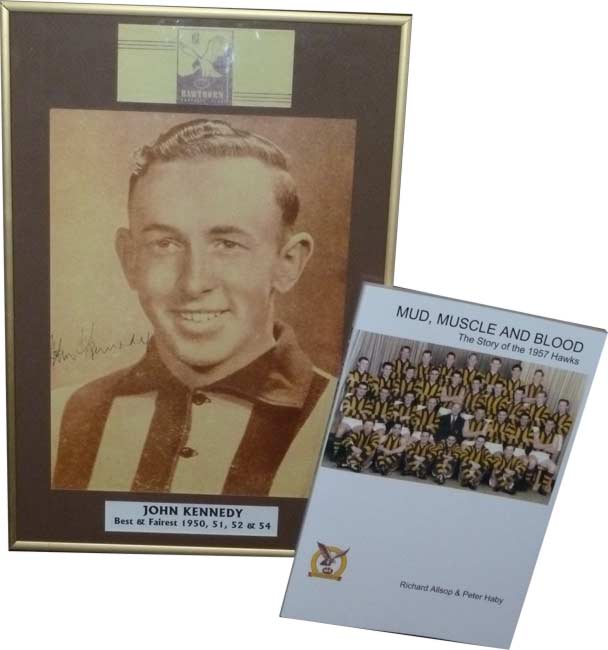 A one off offer, a signed Best & Fairest framed photo of Club Legend John Kennedy Snr plus a copy of Mud Muscle and Blood the Story of the 1957 Hawks.

The framed photo on offer originally hung in the Past Players Rooms in the Dr Ferguson Stand at Glenferrie with the photo dating from 1950, Kennedy’s first year at Hawthorn and would make a marvelous edition to any serious collector of Hawks history.

The book Mud Muscle and Blood written by Richard Allsop and Peter Haby tells the stories of the players, the officials that saw Hawthorn make the finals for the first time in 1957.  Within the 154 pages are many photos drawn from the player’s personal collections and the Hawks Museum archives. The book also comes with a CD that features highlights from the radio broadcast of the day plus interviews with many of the players.

John Kennedy Snr, a giant figure in the story of the Hawthorn Football Club.  Kennedy taught the Club how to win and more importantly to win Premierships.  His efforts saw the Club develop from being one of the easy beats to one of the most respected Club’s in the AFL.  His achievements made him a national face for football, becoming AFL Commission Chairman in 1993.

Kennedy’s importance to the team was immediate with him winning the Best & Fairest four times in his first five seasons, 1950, 1951, 1952, 1954. He was an excellent team member playing as a strong, aggressive, courageous and effective ruckman always bringing others into the game.  Appointed captain in 1955, he displayed astute leadership leading the club to its first finals appearance in 1957.

In 1960 he took over as coach and embarked on a career that would see him ranked among the great coaches.  Wearing his trademark battered brown raincoat, his booming voice and stirring words he molded Hawthorn into the fittest and strongest in the competition becoming known as ‘Kennedy’s Commandoes’, which enabled the team to win their first premiership in 1961.  After coaching to another grand final in 1963 he stood down.

Kennedy was reappointed coach of Hawthorn in 1967 and guided the club to another two premierships in 1976 and 1978 before he stood aside for his protégé David Parkin.